SIBO & Bone Broth: Do They Mix?

Have you heard of bone broth?  Perhaps you have seen it touted as one of the latest health trends? 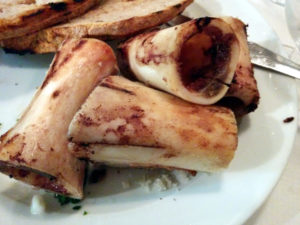 Or maybe you are familiar with the healing properties of bone broth that are well-recognized by the Paleo and GAPS communities?

Bone broth is a nutritive concoction that is prepared by boiling bones (and sometimes meat) in water for an extended period of time.  Spices and vegetables are often added for taste and vinegar is frequently included to aid in releasing the minerals from the bones.

As the bones break down, the minerals calcium, phosphorous, magnesium, sulfur, fluoride, sodium, and potassium are emitted into the liquid. 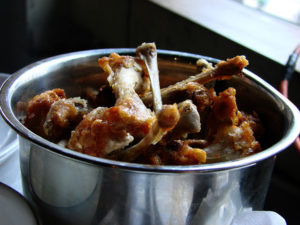 Thus, when humans consume the broth, they are consuming a “pre-digested” source of minerals rather than eating mineral-rich foods that require energy from the human digestive tract to assimilate.

Additionally, bone broth contains three of the eight essential amino acids which can aid in the healing of individuals with a protein deficiency.

Popular bone broth recipes typically use cartilage-containing parts of an animal.  For individuals with SIBO, broth that is made from cartilage can be problematic.

The reason for this is that glucosaminoglycans (GAGS) are released from the cartilage during the preparation of the broth.  GAGS are polysaccharides, which are a category of foods that can be troublesome for individuals with SIBO.

The good news for SIBO sufferers is that they do not have to miss out on the comfort broth.  To make a SIBO-friendly chicken broth, obtain two pounds of boneless chicken breasts and thigh meat.  Combine chicken with 2 quarts of water and herbs such as rosemary, marjoram, thyme, oregano, sage, and tarragon.

The mixture should be heated on the stovetop at a low simmer for approximately 1.5 hours.  If you used organic antibiotic-free chicken, do not worry about scooping off the fat.  Allow broth to cool in glass jars in the refrigerator and enjoy within 5 days.  If you would like to freeze some, make sure to leave room at the top for expansion.

Please note: while the terms “stock” and “broth” are typically used interchangeably, in the culinary world, they actually describe two different preparations.  The term “broth” is used to describe meat, while “stock” refers to a preparation made from bones.

Thus, the common use of the term “bone broth” in which bones are simmered for 24-72 hours, is a misnomer (please note that in this article we have been using the common term “bone broth”, rather than the culinary differentiation).  Presented in a politically correct manner, meat broth is safe for SIBO, but bone stock is best avoided.
References:
http://www.townsendletter.com/FebMarch2005/broth0205.htm
http://www.seriouseats.com/2014/10/how-to-make-rich-flavorful-easy-chicken-stock.html